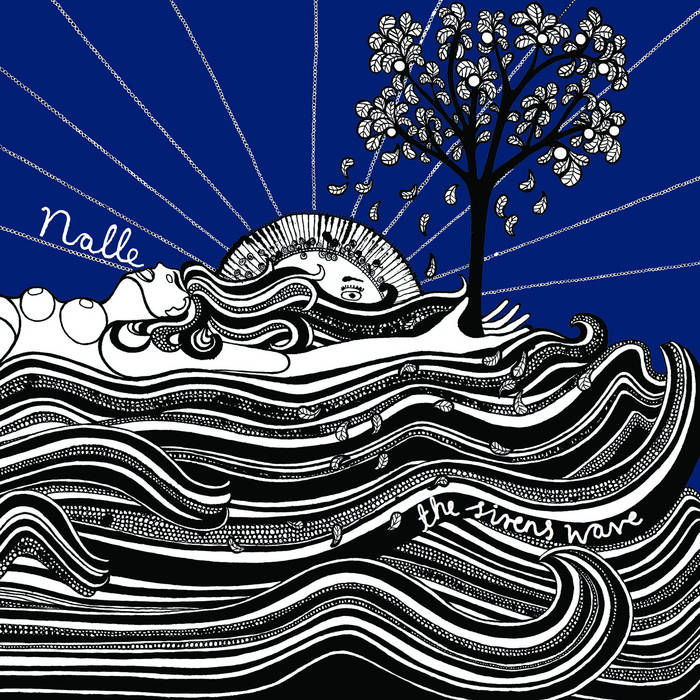 Originally released with Locust Music, 2008 on CD and LP

Hanna Tuulikki, a young British/Finnish artist and musician currently residing in Glasgow, Scotland, formed Nalle in the Summer of 2004 in collaboration with multi-instrumentalist and former Scatter member Chris Hladowski and viola player Aby Vulliamy. Their debut album, By Chance Upon Waking- a largely spontaneous collection of songs recorded in two short sessions – introduced the trio as enthusiastic experimenters with traditional musical techniques, employing a range of instruments including the kantele, flute, clarinet and, Hladowski’s tour de force, the bouzouki. In contrast, Nalle’s second album, The Sirens Wave, is a considerably more meditative and meticulous recording, which further explores the unearthly, mysterious qualities suggested in By Chance Upon Waking. While the latter kept to shorter song structures, The Sirens Wave is built around two ten minute tracks, “Voi Ruusuni (O rose)” and “Secret Of The Seven Sirens”, a stunning conglomeration of East European and traditional Scottish nuances which fold into each other, alternately pushing then subsiding, flowing like rolling waves. These dynamics shape the whole recording, and Tuulikki’s unusual, non-modal approach to vocal melody sends a chill through every track. The inspiration and imagery of Nalle, which means little bear in Finnish, are drawn from nature and rebirth. The opening track “Nothing Gold Can Stay”, and the album’s beautiful conclusion, “So Eden Sank To Grief”, take their titles and lyrical motivation from the bucolic verse of the poet Robert Frost; references to animals, landscape and the sun are prevalent, an reflect the substance of Tuulikki’s impressive work as a visual artist. An ode to Tuulikki’s late friend Alice Duncan , “Alice’s Ladder”, interweaves soaring violin and spacious vocals in a way that sounds as though the two instruments are reaching out of the waves into the dark unknown. Like their friends and peers A Hawk and A Hacksaw, Nalle’s integration of music styles, played with a variety of instruments from across the globe, is so eloquently and passionately performed that it does not sound affected. On the contrary, this is a bold and complex album, on which metaphysical themes of life and grief are articulated with such consideration that the result is unique and deeply touching.
Mia Clarke, The Wire, Issue 291, May 2008

'Voi Ruusuni' features excerpts from 'airs of the sea', a sound piece made in Cromarty on the Black Isle by Hanna from the breaths of one hundred residents.

Produced by John Cavanagh and Nalle at Glo-spot, Glasgow, 2007. Mastered by Carl Saff.

All songs by Tuulikki except 'Nothing Gold Can Stay' and 'Secret of the Seven Sirens' by Hladowski and Tuulikki.

'Voi Ruusuni' is a traditional gypsy song learnt from the singing of Saara Langstrom.

Words for 'Nothing Gold Can Stay' are borrowed from a poem of the same name by Robert Frost.