By Chance Upon Waking 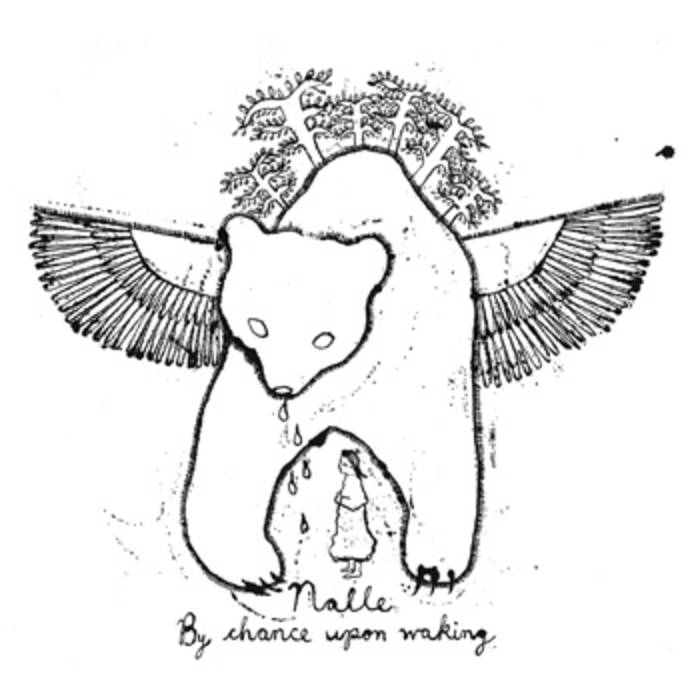 The cover artwork for the debut of Glasgow group Nalle gives clues to the music within and matches its tone: detailed drawings of winged polar bears, bees, birds, and plants on a snow-white background, all plucked from the imagination of singer-songwriter and Kantele player Hanna Tuulikki. Within the first notes of "Sunne Song" the album's array of instrumentation - viola, bouzouki, clarinet, shruti box and guitar - makes total sense. Its clear individuality banishes lazy comparisons to others operative in this area of folk-inflected new music, like Lau Nau or Joanna Newsom. There's a sticky, happy quality to this debut, one that feeds on the underbelly of British and European folk traditions, as well as the threads of Hanna'a Finnish heritage. Her vocals veer between fragility and a forcefully positive self-belief that pushes her voice whrere she clearly believes it must go, whether at it's most extreme in duet with Aby Vulliamy's viola on "Forest-mountain" or hovering close to the point of natural disappearance on "Sea Change". Much of the album was recorded by Volcano the Bear's Daniel Padden and both Vulliamy and Chris Hladowski play in his One Ensemble group. "By Chance Upon Waking" sounds like a record made by a group of friends. It gathers together disparate elements, speaking of winter but always with fire at its core.
Jez Riley French, The Wire, Issue 266, April 2006

10 stars out of 10.... What is the criteria for a perfect album? Is there a laundry list of things that one must check off to qualify? For some people, perhaps. For me? It’s more of a feeling, something in my gut that goes all wonky when a record is pouring out of my speakers. It’s an album that can inspire me to no end. Something that makes you feel like you, as a listener, are vital to the music transcending some artificial line in the sand. I don’t know, it’s very fluid and never easy to pin down. It’s one of those things that I know when I hear it. And I certainly heard it a few weeks ago when Nalle first graced my ears. Nalle is a trio featuring three members of Scatter (two of which also play in One Ensemble of Daniel Padden. Yeah, we’re dealing with heavyweights here). Chris Hladowski, Aby Vulliamy, and Hanna Tuulikki make up the group, and the chemistry between the three is instantly obvious. Acoustic arrangements that stir like lost children late at night provide the perfect palette for Tuulikki to weave pure magic.Nalle treads similar ground as Tuulikki’s Finnish compatriots Lau Nau and Islaja, but there’s a decidedly Scottish twist. Hladowski’s bouzouki and Vulliamy’s viola give the feeling of regal music played in the Medieval villages that dotted the British Isles. The way Tuulikki sings and the things she sings about are a celebration of life and the magic and mysticism that accompanies it. “Forest Mountain” turns the mountains and forests into enchanting characters that are part of some great universal play. As the tension builds, the interplay between the bouzouki and viola becomes almost too much to bear. Tuulikki’s voices waltzes and wavers like a child sorceress conjuring up all the greats spirits of the Earth. Everything comes together to form something totally magnificent on this track. As a listener, you feel as overwhelmed as Nalle sounds. It’s beautiful. The opening track, “Sunne Song,” is a great way to begin the album. It reminds me of early morning on the weekends, lazily rolling out of bed, and stretching your arms to the sun. The hesitant bouzouki notes and the viola drones are subtle, but reenergizing. They pull you out from under the sheets and drag you into the warm summer breezes. “By Chance Upon Waking” is spellbinding from the first flickering moments. Everything comes together on Nalle’s debut to produce some of the best music I’ve heard in years. The instrumentation is wonderful and Tuulikki’s voice, which falls somewhere between Bjork and Austria’s Gustav, are absolute perfection. I can’t get over just how amazing this record is. Nalle’s debut is easily the best thing I’ve heard in 2006 thusfar, and I reckon it’s going to be hard for anything to come close to it. The highest of recommendations.
Brad Rose, Foxy Digitalis, June 2006

All tracks recorded by Daniel Padden in Glasgow, Scotland except tracks 2, 4 and part of 7 recorded by Hanna Tuulikki in Tampere, Finland 2004-2005.